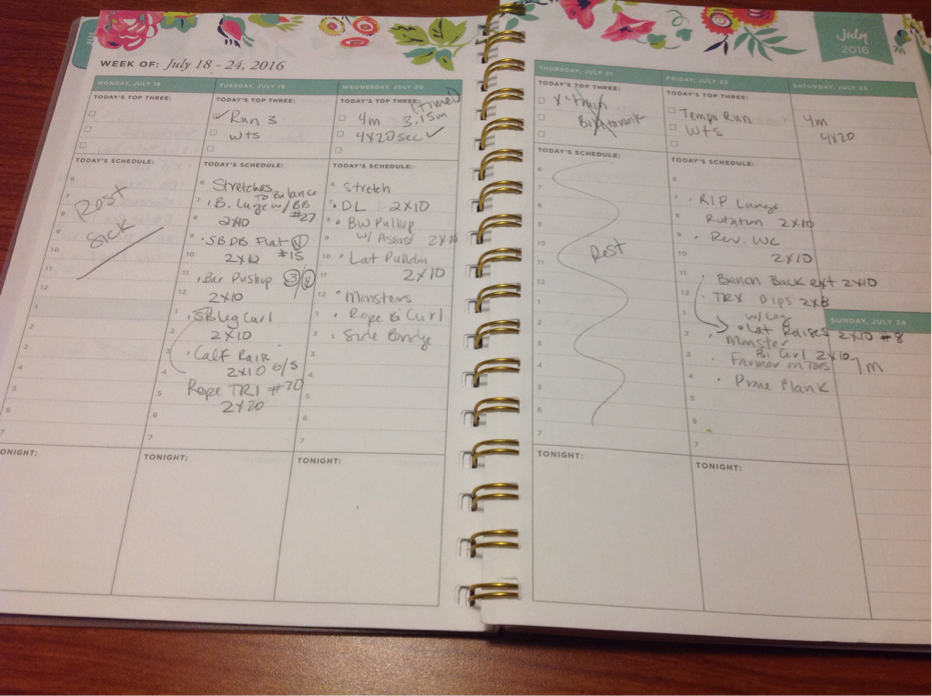 Last summer, when I started running and getting more serious about getting strong enough to run, I used a daily planner to help keep me on track. I think I got this idea from another fitness blogger so nothing really original there. I laid out a plan that I would follow every week and would log daily what I had accomplished. It helped me to see what was working and, sometimes more importantly, what was not.

This became incredibly useful when I got gluten/soy poisoned in late summer. Like Superman’s Kryptonite, I crumble when these two substances get to me. First, the migraines start followed by an unrelenting fatigue. It takes about six weeks for everything to clear up and feel human but then another six before my superpowers return and I feel like working out. Just getting through my day becomes the priority during these times.

After about twelve weeks I picked up my daily planner/workout log and got started again. I’m not going to lie, seeing what I had been doing and knowing I had to start back almost over again was discouraging. At the same time I was motivated to get back to the level I had previously achieved.

For these last 2 weeks I have not done a lot to be honest. The first week after the half marathon I really needed rest. My body was tired, and I was tired of thinking about training and being so careful with my food. So, I walked a lot, I did not lift, and I ate a lot. In fact I ate a lot of dairy. So much so, that I had to skip my first long run back!

In one of the many books I’ve been reading, “Lore of Running” by Tim Noakes, I came across a paragraph talking about how dairy can cause gastro distress during running. For me, I think this is true and after being off of it for several weeks I realize that to have a successful run I have to limit my intake. Over and over, I have read that it is not really about the run itself what makes the difference is what you are doing when you are not running. Everything you eat, whether you stretch daily, drink enough water and your sleep. All of these things I find to be so important to have a good morning run.

After this first week of active rest I got back to it! Usually my goal for each week is:

Obviously, each week varies in reps, intensity, etc. However, I do stretch daily, that never changes. Also, the MOST important thing of every training program – a day of rest.

Here is the wrap for week 1 and 2 of my training for the Spokane Half Marathon:

– Weight training 3 times with 2 sets of each exercise. I worked mostly on stabilization exercises with slower tempo for these two weeks. Stretching was done daily.

– My runs were between 3-4 miles during the week. I added in hills and intervals on 3 out of the 6 runs. (More on this next week!) One thing I am having a hard time with is my long runs on Sunday. I have missed both! One was due to not feeling very well (I’m blaming the dairy!) and the other I chose to take Jack to his basketball camp instead. I could not get both done that morning. Since I got to go shoot around with him on the courts at Gonzaga it really was not that much of a dilemma!

– No biking. Sadly, my bike was stolen in early July and the one I replaced it with I do not love. It is my goal for August to get on the new bike and learn to love it!

Week 3 will be interesting since I’ll be in Denver. A little worried about the altitude difference and having enough time to get everything in.

Favorite running song this week: We Are the People (Sam la More Remix) by Empire of the Sun